i’ve been smoking for more than 20 years. i know it might kill me. but i still think, i take the chance. personal choice. nothing more. i also know about the possible hazards of second-hand smoke, so i welcome the idea of banning smoking, or at least the basic stimulus behind it. but i miss the aspect of voluntariness i actually expect from democracy. 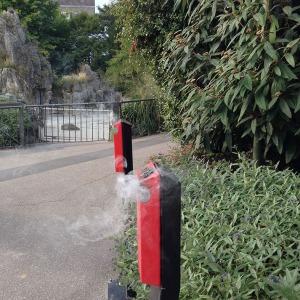 what most western countries have right now is some sort of behavioural dictatorship, not only when it comes to smoking, but also in a lot of other areas of everyday life. as with smoking, i partially agree to some of this “regulations”, but only to a degree at which my personal life is influenced more than my ego and attitude can accept.

so what happened to self-paced life in general? it seems like this very neat concept is loosing more and more ground. which actually makes sense, taking in account the worlds status quo. but in my eyes this status is mostly self-inflicted, since most, if not all of the governments fail to maintain the essential pillars of society: education, maturity, contentment and zeitgeist. just to name a few.

instead they just permanently mend the cover, thus forcing society and the behavioural dictatorship into a downward-spiralling relationship, whose impact we are experiencing right now. what i still fail to completely understand is the conflict between reality and some current and future social drifts we’ll see today and tomorrow, e.g. lohas. though having moved from idea to lifestyle, the majority of society doesn’t seem to care about it at all. in my opinion due to the above mentioned lack of pillar-maintenance. maybe some of the changes might someday work for everybody, but if we fail to additionally try creating some sort of social equilibrium (not necessarily equality) the democratic humanity will still be heading for the worse, I presume.

therefore it seems like we have no other choice than accepting a rising level of external control over our lives. and to hope that we can still maintain a certain amount of individual freedom. or maybe live outside the borders of control as much as possible.

i know, most of this isn’t really news, but i have experienced a rising build-up of the above mentioned in my personal life recently. i also knew, that in comparison to a lot of other countries as a german i am relatively lucky, but still i have this nagging voice in my head, telling me even here we’ve only saw a glimpse of what is yet to come. this simply makes me uncomfortable and probably will for the years to come, because it raises fears of a diminishing self-paced life and to a world which won’t be a place where I’ appreciate to live.

to sum it up, maybe i’m just paranoid or too critical, but i can’t help it. i also don’t have any solution to the above mentioned than to promote the pillar-maintenance to raise a responsible society, which is able to solve problems within itself and doesn’t need too much external control to function.

until then i’ll smoke like hell whenever and wherever possible without interfering with other peoples’ health and comfort. besides other freedom-enhancing activities.