no, i’m not on a trip through america’s south. i will be visiting the bavarians or bajuvaren like they call themselves. this time i’m happy to avoid a hostel in munich, since the last experience totally robbed my last remains of traveller romanticism. but don’t think i got totally pimped…no, it’s some standard hotel in the inner outskirts, where you see nothing of the famous bavarian chique. and i’m really thankful for that.

you see, i’m part of the struggling middle-class people the state always likes to describe as the backbone of the economy, lying to everybody including themselves. middle-class is a fastly diminishing concept. and i think not many people thought it would diminish that fast. when my parents started their middle-class fantasy back in the early 80ies, things seemed to be alright. they did everything they were supposed to do: dad got a job with good career perspectives, mum staid home taking care of the kids, they bought a house in some village “where you got everything you need and the children can grow up in secure surroundings”. that was supposed to be good and healthy, but i think it just helped to maintain the middle-class bubble, that always got dangerously pricked by the surrounding reality. but as long we have several life insurances, a car and 2-3 holidays a year, everything is fine. or is it? the nineties came along with the wish to maybe step a little further up. connect with the lower upper class, start an own business, get a second car and a house in the alps. living the short-term dream, before reality started to strike back. the great business partners turned out to be great assholes, and so the stress of being a freelance consultant began. as well as a 20 year downfall. while still clinging to the “better life”-dream and trying to support the illusion of it through debts and mortgages almost everything got lost. house, insurances, little luxuries and health. with the result of almost being worst off than one was in the beginning.

i don’t know why, but i never really believed in that dream. maybe that’s why i’m much less surprised than some of my peers, that don’t understand, why they can’t continue their parents dream. at least not, when their elders haven’t accumulated or inherited some wealth and used it wisely. so that’s where i stand now. i’m 36, i work as a freelancer and i won’t inherit anything. all i have is my pretty good education, my creativity and my life. and i won’t complain. i like it that way. surely i could have been more career-oriented with my talents and all that, but why? i tried that for some years: 80-hour weeks, chique hotels, crazy parties and a lot of “friends” who, like me, tried desperately not to show how fucked up they really were. if at least the result had been a lot of money, everything would be alright, but money was mostly scarce. i got married in 2007 and me and my wife both had a reasonable income, but never enough to make big steps. which wasn’t our goal anyway. in 2008 i started as a freelancer, because noone i know seemed to think there would be a crisis. but there was, so business was less than slow. luckily it grew steadily afterwards so i was able to pursue my dream: work 10-12 days a month and spent the rest of precious time on life itself. art, writing, existing and not letting society fuck me up too much. maybe get a child, don’t buy a house, maybe get a car. but mostly taking it easy. unfortunately wifey got a total midlife-crisis in 2013 that made her ex-wifey. additionally business stopped completely out of nowhere and life was just shit. all that left me with the ruins of my existence for some time, but it also made me happy. happy about always having been realistic. happy about not having pursued the false dreams and happy about the possibility to start from scratch. probably i will be pretty fucked when i retire, but at least until then i had lived life my way. completely. I’ll be lower class by then, but that’s nothing to be ashamed of. on the contrary, i think compared to a lot of my peers i won’t be hit that hard by the reality that middel-class is a dead concept.

and that’s why i prefer living in a normal hotel in normal surroundings when in munich. here i meet reality. probably my later reality. and can prepare for it. and when things turn out to be better, so be it. 🙂

i have a booking in munich. so far, so good. but the agency wasn’t able to get an appropriate hotel for tonight. champions league. munich vs. arsenal. most hotels in the vicinity of the city centre double their rates for this. result: mediocre rooms for premium prices. which i’m not willing to pay. so i go hunting for reasonable accomodation. with little success, at least when i want a room of my own. so i think to myself: “try back to basic!” meaning “book a hostel!” maybe they changed since the last time i occupied one.

when i arrive at the place around 7:30 pm i instantly know i was wrong. everything is as it used to be. the entrance/bar/internet/reception area is overcrowded with people. all ages, many nationalities. which could be really nice, if some of them weren’t confusing hostel and hostility. i don’t get it. if i pay 23€/night in munich i can’t expect a personal butler or even a smile. and if that bothers me, fucking up other people isn’t the right solution. being surrounded by screaming italians who try to get in front of me at the reception because they are too stupid to understand their check-in documents i try to maintain the german politeness. which is quite hard since i normally give a shit about being polite. the reception guy seems to be on my site. he ignores the italians and gives everything to serve me well. despite the 50 or so people belonging to different travelling groups which are already half drunk and try to imitate oktoberfest vibes.

like i said, he served me well, but he could also be a prison guard. he hands me a bondaged set of duvet covers and a hard-washed towel and gives me directions to my 8-person sleeping room. on my way i discover several disconcerning signs. “don’t throw stuff from the balcony.” “don’t puke in the hallway.” “garbage cans aren’t toilets.” to name just a few. i realise that i obviously haven’t lowered my expectations enough. with that in mind i enter my “room”.

first impression: i got upgraded…it’s a six-persons room. with only two occupants. minimalistic and clean. to put it positively. one of the occupants already made himself comfortable. his name is “Io” and he’s from japan. seems to be nice. then he asks where i got my cover/towel-package and i realise including him there are three occupants. and he made himself comfortable in another guys bed. which i tell him. it’s always astonishing how asian people can express total embarassement with minimal gestures. and i never saw someone rearrange a bed as quickly as he did. amazing. while he’s gone to fetch his package, i prepare my bed. well, my lower part of the bed. and i curse my decision to never join the army. putting a starched blanket over a rubber-coated matress is one hell of a task. as you can see, i wasn’t that succesful. but hey, it’s sufficient for one night.

after putting my valuables in my “well-secured” locker i’m eager to leave the place, hoping my belongings will still be there, when i return. meanwhile i enter some bar to watch the game and sedate myself with some delicious bavarian brewery products, hoping my soon to be room mates don’t snore as hardcore as i do. and looking forward to two more weeks in a nice full-service hotel with one person per room. 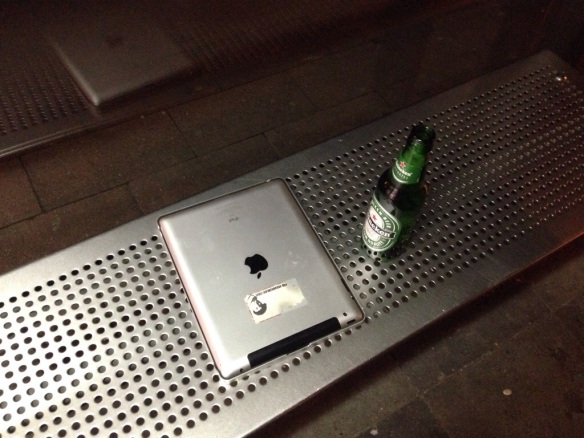